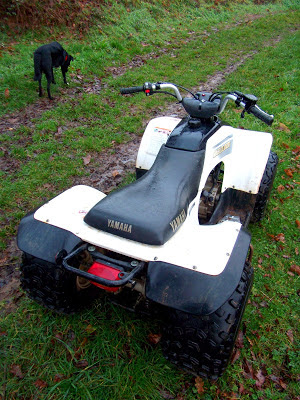 This junior quad bike has been abandoned by the side of a nearby woodland track for the last week or two. It belongs to the 18/19 year old daughter of my near (orange wall) neighbour.

a. Has is simply run out of petrol, and she's waiting for daddy to buy a new one (with a filled tank)?

b. Did it have a 'Free to good home' sticker on it, which has disappeared in a gust of wind?

c. Now that she has a boyfriend, does she perhaps look upon it a past 'My little quad' girly toy?

d. Is it maybe fitted with an explosive device which would be detonated by sitting on the saddle?

f. Has it been placed there for the dogs, to make up for the lack of rural lamp-posts?

g. Could it be the first foreign 'Boris Quad'?

h. (or probably the most likely) She's simply forgotten where she left it; or even owned one!