A Dark and Distant Memory. 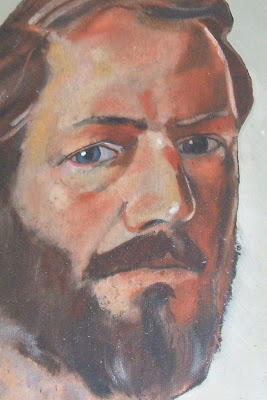 Not a resolution; but I've been trying to organise the studio, enough to be able to walk from one side to the other without the use of pickaxe, crampons, or bandages. Whist re-organising some 'stuff', I came across this abandoned half-scratched portrait.

I knew him back in the mid 1980's. He was a scruffy individual; haughty, vain, and self-centred. As I painted him he scowled back at me with a maniacal glare, and I realised instinctively that he was going to be trouble. He insisted on drinking as he 'posed' for me, and changed his position constantly as he sat either fidgeting with his unkempt beard, grunting, or helping himself to glass after glass of my 'better' wine.

I soon realised that I was wasting my time with him, and told him to leave. I don't know why I kept the half-finished job; I should have destroyed it at once. I've now put it on a pile earmarked 'bonfire'. Certain dark memories need to be eradicated for good.

I wonder what became of him.