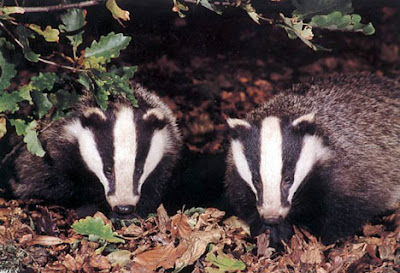 Maybe it's because I was brought up reading Rupert Bear books that I have such an affection for Badgers. As far as I'm personally concerned they do no harm, although I do understand that they both spread Bovine TB disease, and destroy certain crops. 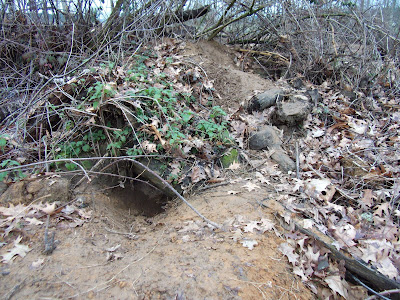 Just 200 metres from my front door is this huge Badger set that probably contains a dozen or so creatures. The photo above shows just one of the entrance holes; in all there are about six.

The whole complex is constructed in amongst a pile of very large old tree stumps, and, I imagine, involves a formidable system of underground rooms and passage-ways. The piles of excavated earth are huge.

Recently some hunters arrived and put down dogs. I believe they shot a couple as they tried to flee; then just went away. If this was done in the name of 'sport', then it wasn't very sportsmanlike. If it was done to rid the area of Badgers; then it was inefficient, incompetent, and stupid.

Why not just leave them alone. I'm sure we can live side by side without reverting to pointless slaughter.