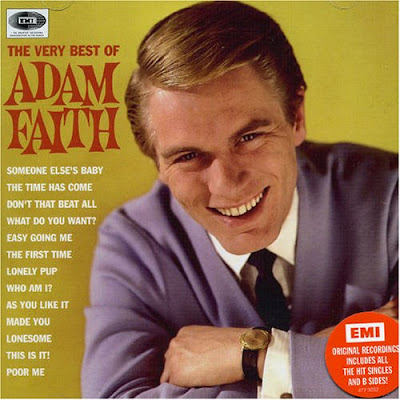 I've just been looking at a picture of F1 boss Bernie Ecclestone in The Sunday Times, and at once it made me think of the late Adam Faith (they could almost have been twins).

Many trans-pond readers may not know the name of our 60's 'pop idol', Adam Faith, but he had several UK hits including 'What do you want' (if you don't want money). However, this makes little difference to my tale.
After his pop career, in the 1980's Adam Faith somehow managed to become a Financial Advisor. He even became financially involved with TV's ill-fated 'Money Channel'; leaving him bankrupt and owing an estimated £32 million. He also famously gave financial advice to film producer/director Michael Winner (amongst others); losing him several arms and several legs.
Having been in Stockbroking myself back in the mid-60's, I've always liked Groucho Marx's observation that 'A stockbroker is someone who invests your money, until it's all gone'. I think Adam Faith, who died in 2003, would have agreed with him.
How come such people set themselves up as experts? And what gives them their frightening delusion of confidence? Unfortunately I know people who continue to take advice from 'Financial Advisors'; always losing money in the process. Will they never learn?
Posted by Cro Magnon at 05:27