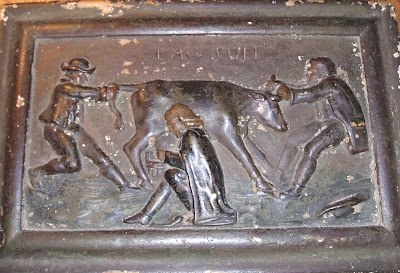 I bought this early plaque when I was in my late-teens; it must have been one of my first delves into the world of antiques. Made around 1800, it is obviously influenced by the Gillray/Rowlandson school of satirical cartoonists.

Its message is all too clear. Two men are fighting a legal battle, but it's the lawyer who milks the rewards. A lesson as poignant today as it was in the late 18th and early 19th C.