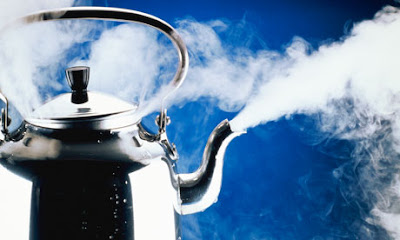 I had a friend (let's call him David), who lived alone in a small rented cottage miles from his nearest neighbour. David was a wood turner; he made very beautiful bowls.

One morning, as he'd done so many times before, he went to the kitchen to make his breakfast of toast and coffee, and when he lifted the kettle, to put it on the gas, he found the water to be piping-hot. In the washing-up bowl was a used cup. He knew that he hadn't left it from the night before; he never did. And anyway, it wasn't HIS cup; it was one that had been hanging on the dresser.
David first checked the house; there was no-one there, and nothing had been stolen. Then he checked the two doors; they were both still locked. He checked the windows; nothing had been either forced or broken. He checked outside; all was as usual.
I must add that my friend David is a big guy; not the sort to be easily spooked. But this incident upset him so much that he left the cottage quite soon afterwards, and moved closer to civilization.
He talked to the local police about the intrusion, but no-one did ever solve the riddle of his silent visitor.
Posted by Cro Magnon at 06:09