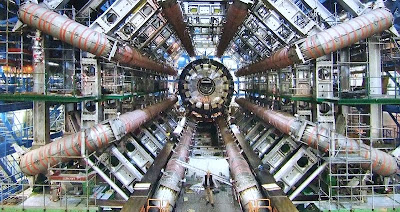 Doesn't the Large Hadron Collider fill you with pride and admiration, and aren't we all so thrilled that it was built at such miniscule cost (£6.19 billion, $6 billion, €7.5 billion) to the international taxpayer.

Don't you become ecstatic at the very thought of discovering if some hypothetical elementary particle actually exists.

No, I didn't think you did. It bores me bloody stupid too.

Now, what other good works could we possibly have funded with over six billion quid (so far)?
Posted by Cro Magnon at 07:00