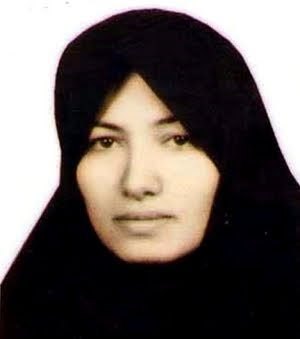 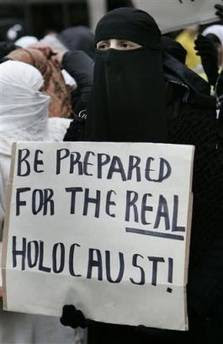 Just about everyone in the Free World knows that Iranian Sakineh Ashtiani has been sentenced to be stoned to death. Yes, we all laughed at the stoning sketch in The Life of Brian; but this is the REAL THING.
In 2006 Sakineh was found guilty of adultery and given 99 lashes. After false accusations in an entirely separate trial she was accused of the adultery having taken place prior to her late husband's death, and the stoning sentence was delivered in her absence; even though she had already received her Qu'ran designated punishment.
The young lady above (with the placard) is demonstrating on the streets of London; openly and shamelessly threatening the British non-Muslim world. I think she might be better employed looking to the welfare of her fellow Muslim sisters, who face daily threats of barbarism from both judicial and religious leaders, back in her own less tolerant homeland.
It only needs a few evil words from a rejected suitor, and she could find herself facing the same unjust and disgusting punishment as Sakineh.
I wrote in my sidebar that 'I make no judgements'. Well I'm breaking that promise because I (like so many millions across the world) feel so strongly about the plight of Ms Ashtiani. Please do whatever you deem possible to help this poor woman; and quite probably thousands of other women like her.
Posted by Cro Magnon at 06:35