We were watching The Calcutta Cup, when we noticed that Billy was watching it too. In case you are unaware, The Calcutta Cup is played between Scotland and England, and is the opening game of the annual 6 nations Rugby tournament.
Billy being a Border Collie, his ancestors came from the Scottish border, so no doubt he was supporting Scotland.  I'd not seen him watching TV before, not even 'One man and his Dog'. 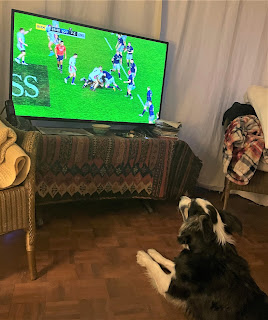 Scotland won 20 -17. Not the result we were hoping for, but Billy went round with a smile on his face for the rest of the evening.
Posted by Cro Magnon at 15:50