And, on much the same theme as my previous posting, here in Brighton folk seem to have suddenly gone mask-less (apart from me). I was in town briefly yesterday and I appeared to be amongst about 1% of the population who still wear a mask in public.
My oldest (Kimbo) has just flown to Singapore on business, and sent me the photo, below, of a man wearing full Hazmat suit for their mutual flight. 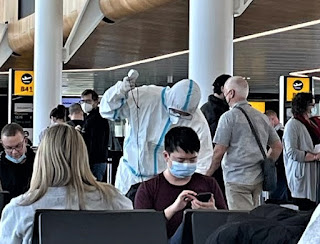 There certainly is a more relaxed attitude around about Covid. I think people are simply fed-up with it all and have become blasé. I'm not quite sure what the man above thought he was achieving by wearing his suit; the virus is more likely to attack you through your mouth or nose; seldom your elbows or knees.
Poor Kimbo needed a negative test before taking his flight, and now that he has arrived he needed another negative before being allowed out of his hotel room. When he called me yesterday morning he called it his 'cell'. He's now received his 'parole'.
He's had a more intimate association with the virus than most of us.
p.s. Please excuse me if I don't reply to all your comments, I've torn a muscle in my right shoulder, and typing is almost impossible, and painful.
Posted by Cro Magnon at 04:49