On the principle that 'if it looks like a Duck, quacks like a Duck, and swims like a Duck; then it probably is a Duck', I threw caution to the winds and bought what looked like an alternative product to Worcestershire Sauce. I'll try anything once! 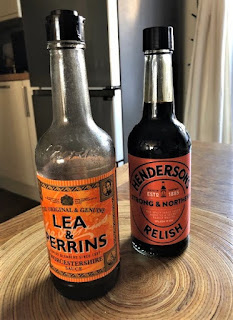 I'd not heard of Henderson's 'Strong and Northern' Relish (made in Sheffield since 1885), but I was prepared to give it a go. If it's been around for such a long time, they must be doing something right.
It is of course an unashamed copy of Lea & Perrins Worcestershire Sauce (made in Worcester since 1837); the colour of the sauce, the shape of the bottle, and even to a certain extent the label, all suggest that it would taste like L & P's.
It didn't. It's not all bad though, and with the addition of some extra Tamarind, and maybe some anchovy, it might almost fool an amateur. As it is, it is slightly vinegary, and lacks the rounded flavour of its doppelgänger. In fact it doesn't have a great deal of flavour at all (I did a comparison test).
However, I don't totally regret this purchase; especially as it was about half the price of L & P's.
Has anyone heard of Henderson's?
Posted by Cro Magnon at 04:51