When we were in France, if we wanted Mince Pies for Christmas, Crumpets through Winter, and Hot Cross Buns for Easter, it was up to Lady Magnon to make them. Which she did; and did extremely well.
Here in England, however, such delights are available everywhere, and generally they are as good as home made; and in certain ceases even better (i.e. Crumpets). 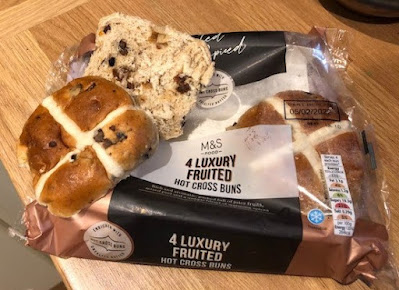 Now that we're here, we don't deprive ourselves. The Mince Pie season is now over, the Crumpet season will be with us for a while, but the Hot Cross Bun season will only continue until Easter; which is around mid-April.
I love Hot Cross Buns. What better treat to accompany your cup of Lapsang as you fill your crossword, or listen to The Archers.
For those who are new to these delicacies, they are usually sliced in half, toasted, and 'thickly slathered' with butter. No Jam, Peanut butter, or Marmalade is required or advised; just butter (preferably salted). 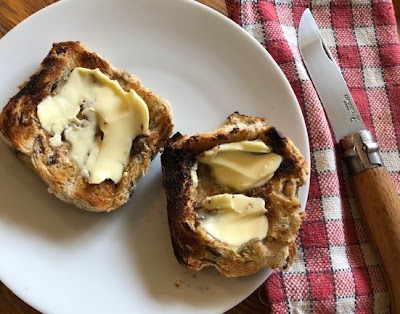 France may have their Croissants and Pains au Chocolat, but they really don't compare to the UK's Cakes, Scones, and other tea-time delights.
At this time of year no-one who calls him/herself 'English' would be without a pack of HCB's in the cupboard. One of our current season's pure delights!
Posted by Cro Magnon at 04:51