Behind our house, there's a short twitten that runs between our garages and the garden behind a primary school. Over recent days, Billy has been very interested in an ever expanding hole under the fence. I would estimate its size as about 7 by 6 inches.
Being a country boy, I'm always interested in the behaviour of wild life, and I'm watching the evolution of this sub-fencing passage with interest. 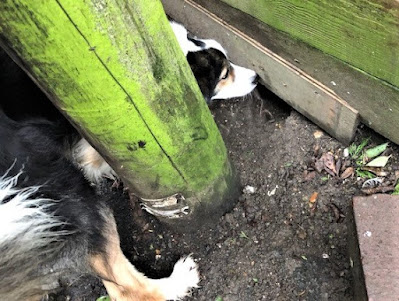 It shows fresh signs of digging daily. It's too small for a Fox; unless it's for cubs. It could be a Rat, but it's almost too large. I have seen a Squirrel in the tree above it, but I don't know if Squirrels dig holes as such. It could also be a Hedgehog, but again, I'm not sure if they are 'diggers'.
I don't think we have Badgers in town, nor do we have Stoats or Weasels.
I notice that someone has tried to block the hole with a roughly nailed plank, but it doesn't seem to be deterring whoever the digger is.
I do hope it's a Fox, and that it the passage will soon be enlarged. I do rather like the idea of Foxes living nearby. People say they kill Cats, but I think this is false. Somehow, though, I doubt if it's a Fox.
Billy is certainly keen on meeting whoever pokes his/her nose through the opening. He finds it fascinating; as do I.
Posted by Cro Magnon at 04:16