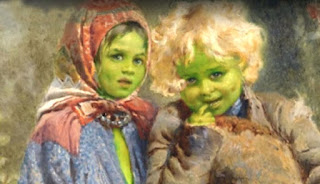 Some time in the 12th C, two children, a boy and a girl, suddenly appeared at harvest time in the village of Woolpit in Suffolk; their skin colour was green. No-one knew who the children were, or from where they came. They wore clothes that were unfamiliar to the villagers.
They didn't speak English, nor would they eat the food offered to them; eventually eating a few Broad Beans which they seemed to find acceptable.
Later having learned to speak some English, they claimed to have come from some subterranean land called St Martins Land, where everything, and everyone, was green.
The children were taken-in by a local benefactor, Richard de Calne, were baptised, and brought up by the family. They soon adapted to local food, and eventually lost their green skin colour. Sadly after a short while the boy died, and his 'sister' went on to become a servant in de Calne's household; although she was said to be 'wanton and impudent'.
She later left their employ, and married a man from King's Lynn.
So, who were these green children? Did they ever exist, or are they just the subject of folklore? There are many possible explanations, but the one that most appeals is that they had been working as slave labour in a local Copper mine since a very young age, and had not seen the light of day for many years. This could explain their colour, and that they claimed that everything in St Martin's Land was also green. It might also explain why the boy died; which could have been by Copper poisoning.
Some also say that the whole story is pure mythology, and that they'd never actually existed; although the many contemporary references to them suggests that there must be a certain amount of truth in there somewhere.
If you live anywhere near Woolpit, maybe you know more; or have even visited St Martin's Land. I'd love to know.
Posted by Cro Magnon at 04:49