Why do I do this to myself?

You'd have thought I'd learned my lesson after the disaster that was the Veggie Chorizo Sausage I ate last week. But no; I was brought a Veggie Burger to sample (by the same un-named person), and was forced to eat it. 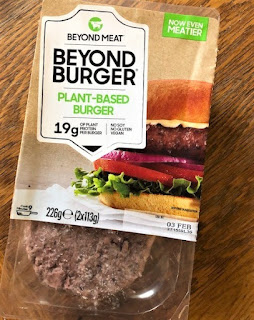 As you can see by the pack, they are called 'Beyond Meat', yet described as 'Now even Meatier'; something at odds there.
It states that the Burgers are suitable for Vegetarians, but not Vegans. I did notice that the use by date was a couple of days overdue, but that didn't worry me.
I gave them 4 mins on either side in my very fancy Le Creuset non-stick pan, and I must say they did look very appetising. 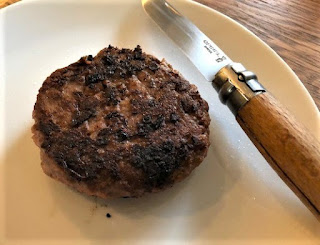 So......... How were they? Well, I must admit that I thought someone was playing a trick on me; it not only tasted very pleasant, but it also tasted very meaty! The texture was right too.
Verdict: 9/10. Really not bad at all. In fact; had I not seen the pack, I'd have thought it was Beef.
Very surprising. (I can hardly believe that I'm writing this).
Posted by Cro Magnon at 04:23