Let it be known that I am not against vegetarianism, I have flirted with the idea myself over the decades; but have always returned to an omni-diet.
Someone (who shall remain nameless) left these veggie sausages in my fridge recently, so in the interests of gastronomy I felt obliged to give them a go. 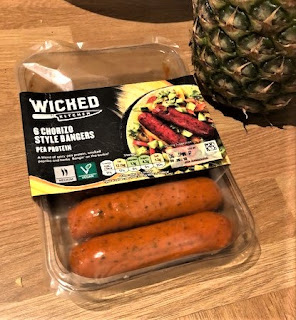 They are described as 'Chorizo Style Bangers', and are made from 'pea protein', red pepper, mushroom, and seasonings. The pack assures me that they are suitable for vegans.
The ingredients would normally cause no alarm; everyday vegetables with seasoning. What they then do with those ingredients, I have no idea. Grind them up I suppose, and squirt the resulting 'product' into casings. They were made for, and sold by, Tesco (A wonderful store; I'm a shareholder).
So, yesterday morning I threw caution to the winds, went against everything I have learned over the past 50 years, and tucked-in.
I'm sure you already know what my verdict is going to be. Yes, they were awful. They were totally bland regardless of having been described as 'Chorizo Style', and had an unpleasant texture. I was not surprised that all but one had been abandoned in our fridge. Luckily I also cooked myself some Haggis and Black pudding at the same time, so my breakfast was not all lost. I'm afraid after one mouthful, the sausage went to ground. 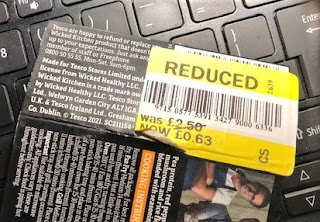 Only having consumed some of the 'sausage', and taken a photo of the packet, did I turn it over to find that it had been reduced from £2.50 to 63p. Had I seen that before my product test, I wouldn't have touched them with a vegan bargepole.
Verdict: As expected. 0/10. Possibly the worst thing I've tasted for years..
Posted by Cro Magnon at 04:21