This Really Annoys Me

I don't know why I should be so annoyed by headlines such as this, but I suppose it's possibly because it risks making others feel that they're somehow inadequate. If they've worn the same clothes more than once, then they are being 'cheap'.
Why on earth shouldn't Queen Letizia wear her dress more than once, and why on earth do they refer to it as 'recycling'? I don't 'recycle' my T shirts or socks, so why suggest that Letizia does? The man in the brown trousers looks as if he'd recycled those several hundred times; but no mention of that! 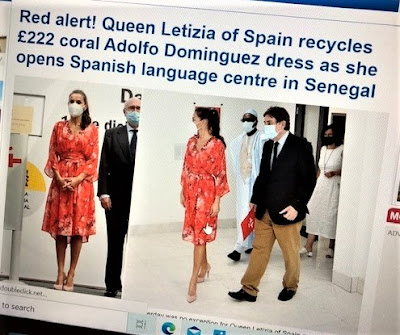 I am well known for using clothes for as long as possible; in some cases until they literally fall to bits. My old long Barbour coat is a fine example; it's still hanging on, just.
Who in their right mind would spend £222 on a dress and only wear it once? I'm sure that those who meet The Queen will have worn their clothes on several occasions, and I don't suppose they would be fussed if she did the same. It might even make her seem more approachable.
Posted by Cro Magnon at 04:21