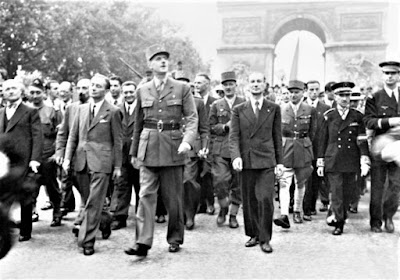 Oradour is back in the news again, via a recent book on the subject; 'Silent Village' by Robert Pike.

I imagine that most people know the appalling story of Oradour-sur-Glane; a village about 2 hrs to the North of where I live.

Exactly 77 years ago on the 10th of June 1944, soldiers entered the town of Oradour-sur-Glane, ordered all the inhabitants to gather in the village square, then separated the men from the women and children.

The men were all 'machine-gunned', and the women and children forced into the church, and burned alive. The soldiers left the village with not a single building unscathed. All 642 innocent villagers were brutally murdered, and the buildings, etc, in respect, have hardly been touched since (see Wiki). The village apparently had had no resistance workers (Maquis).

It was the Brits who, later joined by the Americans, saved Europe from this type of barbarism, the Concentration Camps, and from semi-compliant occupation. The UK lost 450,000 citizens whilst assuring France's liberty, so one might have imagined that the French would be a tad grateful!

Charles de Gaulle ran from France, and spent much of WW2 safely within the walls of a pleasant home in Hertfordshire, England. Those of us later seeing those photos of him proudly leading his men down the Champs-Elysées on August 24th 1944 (above) to celebrate the end of German occupation, are 'slightly bemused'; to say the least.

Back in France, on July 4th of 1940, de Gaulle was tried as a 'deserter' and was sentenced to 4 years in prison, in absentia, and his French nationality was withdrawn. Then on August 2nd 1940 he was again tried, and was awarded the death penalty, as well as military degradation, his loss of nationality, and the confiscation of all his property. Four years later he amazingly returned to France as a 'General', and was treated as a hero.

The blood of our ancestors remains on French soil, but now that we've left their expensive and inefficient European club, they wish to ignore all that, and are doing their best to punish us.