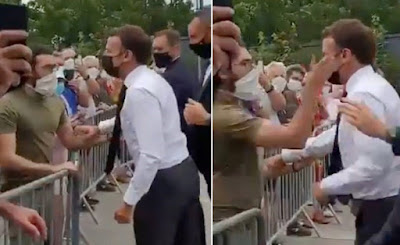 On January 1st 2022, Emmanuel Macron will take over the Presidency of the EU for a 'rotational' six month term in office.

He has announced that his first action will be to change the official language of the EU from the current dreaded English, to French. It's good to know where his priorities lie.

This was attempted once before by Jacques Toubon. Known as the 'Loi Toubon' it was designed to insist that French was used whenever possible (in France). Toubon himself instantly became known as Jack Allgood, and the use of English throughout France seemed to increase dramatically.

People will always veer towards a language that works best in whatever situation. If the use of the word 'Cornflakes' sells your product better than Flocons de Maize, then that is what you will use.

We were amused recently, when stopped at a temporary traffic light, to see that the car in front of us was a Citroen 'Cottage'. Good luck to Macron if he tries to stop future Citroen cars being named 'Bungalow', or 'Apartment over the Chip Shop', etc.

English is the language of Diplomacy, the Air, and the Sea. It is also the world's preferred second language. We all know Dutch, or Danish, or Swedish people who speak English better than most English natives; and they are very proud to do so.

Today, English is still the world's most spoken language. There are 1 Billion, 348 Million speakers of English as a first language; of French there are just 267 Million.

If 'Teacher's Pet' Macron thinks he's going the change all that; then good luck to him.