It's not unusual to read of people who've lived their lives pretending to be something they're not. I think the most popular fantasy is that of being a doctor. 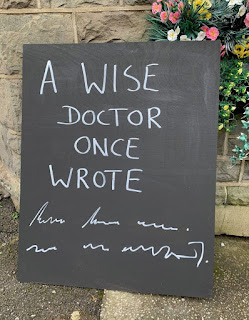 Pretending to be a priest is another favourite, as well as ambulance driver, policeman, or teacher. Usually such choices are based on the 'power and respect' shown to the chosen profession. Very rarely, if ever, would anyone pretend to be a road sweeper or dustman.
Every time I visit my doctor, I end up thinking 'I could have done that'. He asks me how I am, takes my blood pressure, weighs me, then tells me to eat less salt, less charcuterie, take plenty of exercise, and lose some weight. Nothing complicated there.
My prescription is already on his computer, so even that is just a matter of pressing a button.
I presume he does much the same for every patient. I have yet to see anyone in his waiting room bleeding from a stab would, which might take some extra expertise.
Yes, I reckon I'd make a pretty good fake GP. Dr Magnon will see you now sir.
Posted by Cro Magnon at 04:23