I'm pretty sure that this Texas family is not typical of gun owners in the USA, but I do believe there are more guns in circulation over there, than there are actual American citizens. This lot below look a tad obsessed! 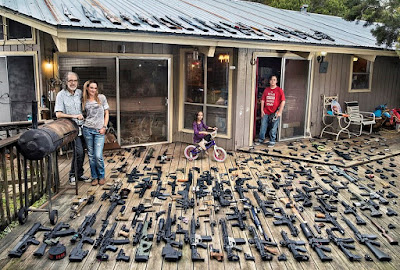 I am a gun owner, and can boast a tiny collection. My guns are not of the military hardware variety as seen in the above photo, but a low-powered air rifle, and an air pistol.
My very old BSA Cadet Major .177 air rifle was given to me by my father (very surprisingly) as a Christmas present when I was about 10. It was totally out of character for him to give me such a wonderful present, and I've treasured it ever since.
I also own a very old, and heavy, Webley Premier .22 air pistol (below), that is almost an antique. I bought it at an isolated petrol station in Wales back in about 1970. I was paying the man for my petrol when I noticed a glass case containing about five used Webleys for sale. I bought the best of the lot. 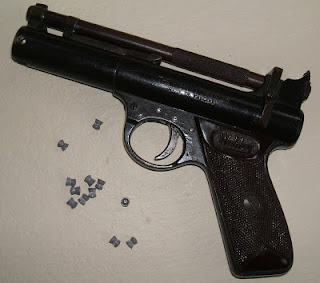 In the past I also owned a single shot .22 pistol, that, sadly, was essential in 'dispatching' both a dying Badger, and a wounded Deer. Not pleasant tasks, but one I couldn't have done without my 'priest'.
Guns have always held a fascination for boys and men. Putting a small hole in the bullseye of a target is a 'rite of passage', and that's as far as it goes in this household. Visiting grandsons always ask for a session or two of target practice, and they love it; as do I.
Also in the past I owned a double barrelled 12 bore shotgun. I'd imagined that out here, in the wilds of Southern France, that 'rough shooting' (Pigeons, Rabbits, Pheasants, etc) would be far better than back in England, but in fact it was almost non-existent due to the reckless use of guns by just about every male over the age of 16; no creature was safe. I eventually sold my gun to a Dutch chef; but never received payment.
I would never shoot 'game' these days. I prefer to look at creatures; not kill them.
No, I'm not a gun-totin' redneck from the backwoods; I'm just an ordinary bloke who enjoys target shooting in the garden.
p.s. I've recently noticed that the going price for my old Webley pistol is about £250... so I might take it back to the UK and sell it.
Posted by Cro Magnon at 04:19