What do you give a thirteen year old boy for his birthday?
A new pair of gloves? A Waterman Pen and bottle of dark blue Quink? Or maybe a lifetime subscription to The Beano?
These days the choice is endless. Ollie, my younger UK grandson was given a couple of days driving high-powered cars on a track in Yorkshire. Here he is, below, just about to take out one such supercar (I have no idea what it is) with his instructor. I believe he had a go in several different cars. 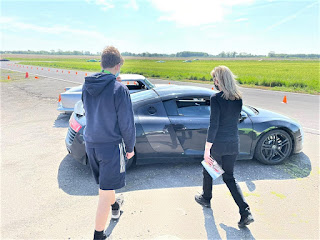 This is a great idea for kids. Next year it could be flying, scuba diving, or driving a Chieftain tank. The more extreme experiences they have the better! 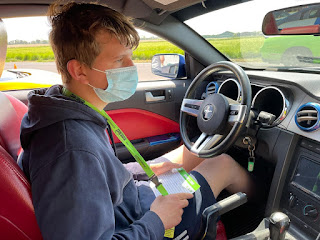 Here he is at the wheel of a 'prepared' Mustang; a beast of a car. I didn't hear how he got-on, but I did see a video of him driving 'cautiously'. I'm not surprised.
The only car I've ever driven on a track was a Lotus Junior racing car, and I crept around the track at about 30 mph; I was scared stiff of crashing it. I think I did two laps.
In a few years time, I expect he'll be asking his dear Papa for a Porsche or a Lotus.
T'was not thus in my day; we had a birthday cake with candles, and maybe some Walls vanilla ice cream afterwards.
Posted by Cro Magnon at 04:21