I've posted this photo before, but I thought I'd do so again; just for the hell of it. I believe it was taken on 28th June 1954.
At the time Churchill was Prime minister; Eden (background right) later replaced him in April of 1955. Between the two is Roger Makins (later Lord Sherfield) who was the Ambassador.
Eden's premiership was exemplified by his failure to resolve the Suez crisis; Nasser proving to be the only 'winner' after the conflict. Some international relationships were strengthened (UK-USA, and France-Israel), but Egypt's renewed friendship with Russia became a lingering problem. Eden soon resigned, and has since been seen as a weak PM. In the photo he must have had no idea what his future would hold. 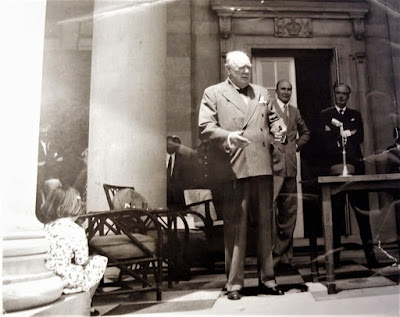 The photo was taken on the steps of the British Embassy in Washington DC, where my late Father-in-Law was a senior diplomat; he's just out of shot.
The small girl sitting at the base of a pillar (bottom left) is a very bored Lady Magnon.
Soon after the photo was taken, Churchill asked the young Lady M if she'd enjoyed his speech. Being from a 'diplomatic family' she replied "yes". She lied!
Posted by Cro Magnon at 05:27