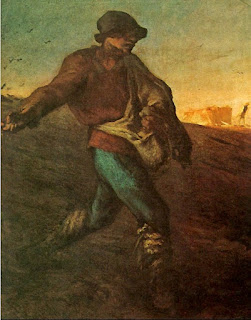 When I bought my original farmhouse here in France, it came with just over 2 acres of good mostly level land, plus a small plantation of Sweet Chestnuts; about 20 very-mature trees.

Dealing with the Chestnuts in Autumn was simply hard graft, tedious nightly sorting into 'large and small', and hazardous selling. The merchants, of course, always tried to knock down the price..... I learnt the hard way.

One of the first actual grown crops that I attempted was Gherkins. These are the small undeveloped fruits of the 'Ridge Cucumber', that are picked when between 2-3 inches long. They were an easy crop to grow, and the merchants came to the house every other day to collect them. I suppose we sold between 5 and 10 kilos at each occasion. They grew like crazy, and required constant picking.

I soon fancied myself as a proper farmer, and decided that I needed to grow a pukka 'agricultural crop' on my land. My first attempt at 'agriculture' was Maize; one of the easiest crops to grow.

I borrowed my neighbour's small Massey Ferguson 35 tractor, and was given a five minute lesson on ploughing. I must say that my effort was pretty good, and when later rotovated, the field looked as good as anyone's. My crop did well, but on account of my reluctance to spray with herbicides, the final harvested crop came with a lot of unwanted seeds, and went to feeding our, and a friend's, Hens.

The following year I had a go at Wheat. Again I ploughed and harrowed, then hand broadcast the seed in old fashioned style (as in Millet's painting above). In my area, it was normal for growers to exchange their Wheat crop with local bakers for bread. Unfortunately my crop was again full of unwanted wild seeds, and the baker turned it down. Again it was used as Chicken feed; most of the crop being sold to a local organic farmer, who didn't mind a bit of grass seed amongst the grains.

After my second attempt at playing Jolly Farmers, I decided to quit, and I devoted my land to the much easier production of hay, which I was happy to give to my neighbour.

I left farming to the professionals.