It's not really Pizza season, but this isn't a Pizza anyway.
I was leafing through Rick Stein's book 'Secret France', when I came across his recipe for Tarte Flambée, and it really appealed.
In Alsace, where this tart comes from, it's known as Flammekueche (pronounce that as you will), and I suppose it is a pizza look-alike. 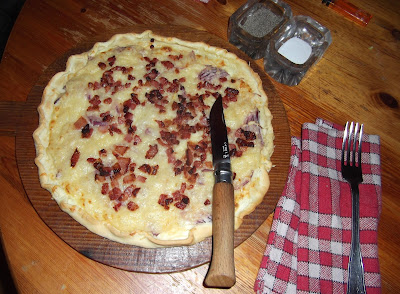 This (above) is the one I made last night. The main difference is that there is no tomato and no mozzarella on the French version. The base of the Tarte Flambée is firstly spread with thick cream, then thinly sliced onion, then grated Emmental, and topped with tiny cubes of fried smoked bacon. About 20 mins in the oven, et voila! Nothing could be more simple.
Lady M complained that there was no accompanying salad, and I agreed with her; it needed something crisp and refreshing alongside. Otherwise it was very good; a bit rich maybe, but pleasant for a change. Below is Stein's superior version which prompted my desire. It's worth a go... you may like it. 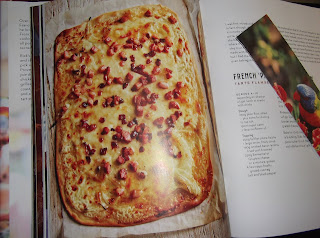