The barn behind ours is currently being turned into another home. The new owner has been working on it for about a year.
During all that time he's had no water or electricity. The water people came about two weeks ago, and the necessary pipes do now reach to the edge of his land. All it needs is for his plumber to connect the pipes..... The electricity connection has proved more complex. 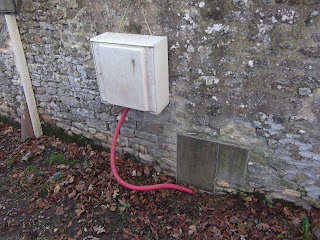 The nearest point to connect to is behind our house (above), and the EDF have now been to connect a temporary supply. But rather than connect it to our barn's supply (below left), to which the new owner had already fed his cables (the red tube), they have connected to our supply on the other side of the track (below right); meaning that those cables on the bank will now have to be dug-up, re-positioned, and buried underground in the track.
As I said, this is a temporary connection to a building site. For the actual connection they will have to wait another SIX MONTHS. 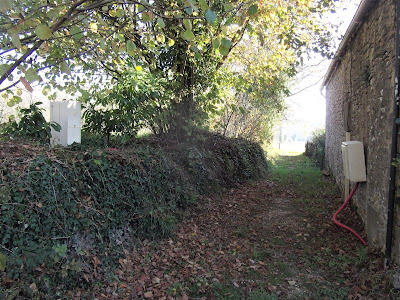 Now, I may be a bit dim, but what the hell is the difference between a temporary connection with its own meter etc, and a pukka connection in the same spot, with its own meter etc. All the wires and cables are there, but rules are rules, and when they say six months; that's what they mean!
I don't wish to be rude about the EDF (we've never had any complaints, other than power cuts), but it does seem as if they are very fixed in their ways.
When the men were here yesterday, I asked if they were sure I wasn't going to be paying for the other person's electricity; they assured me that I wouldn't be. When I then asked them if they could fix it so that he would pay for mine; they unfortunately said 'no'.
It now looks as if we'll have that horrible temporary box hanging on a nail from the back of our house until May 2021.
I apologise if the above all sounds rather confusing. It's difficult finding the right words to describe what's going on here. Believe me; the world (and the EDF) works in mysterious ways.
Posted by Cro Magnon at 04:24