Garth Leroux is a South African, fast-bowling, cricketer who played for Sussex in the days when I was a member of SCC. Here he is (below) doing what he did best, whilst wearing his SCC martlets jumper. 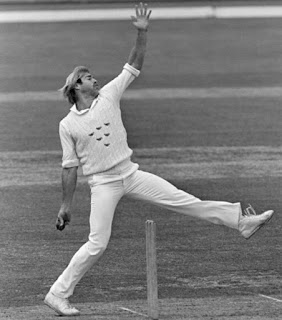 The Sussex home pitch at Hove was slightly sloping to the South, and often we would see Imran Khan bowling uphill, and Garth downhill; they were both very effective bowlers.
I would often take my oldest to Eaton Road Hove to watch these two playing. We'd sit at the members pavilion from where we'd have easy access to all the players.
When Garth had a particularly good day, I'd tell Kimbo that he had Lion meat specially flown in from S Africa, which he'd eat before the game to give him extra strength. If he got no wickets, I'd say his Lion meat must have been held-up in the post. This became as much a part of the game as the play itself.
Even today, if my oldest, Kimbo, has a poor day with the ball, I will scold him by saying that he obviously didn't eat his Lion meat for breakfast. He usually admits that this was the case!
I've also threatened to send him some, to cure him of his wretched COVID-19.
Posted by Cro Magnon at 04:25