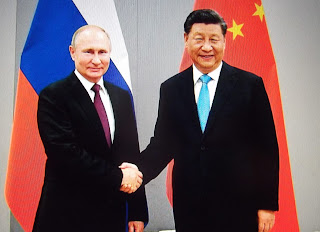 Oh dear; please believe me that this is a totally non-partisan political observation.

Whatever one thinks of either Trump or Biden, we must accept that we are living through extraordinary times.

Harry S Truman was in The White House when I was born, and since then I have lived through some strange presidencies. There's been Tricky-Dicky Nixon, Ronny 'the cowboy' Reagan, and now Trump; to name just three.

None has caused as much international horror, concern, and (yes) amusement, as dear Trump. He really is the most extraordinary man. Each time I see him strutting towards a microphone, with that arrogant orange face of his, I cannot help wondering what on earth is going on inside his head; and yet he has an enormous low-paid-worker fan base; not something one would have expected for a Republican POTUS.

Other countries have the occasional unelectable crazy politician who manage to find a following. In the UK they've recently had Corbyn, for heaven's sake. But none has been as bizarre as Trump; and he actually managed to get elected.

I have no idea how long it will take to sort-out all the current mess, but it's certain that there'll be only one real loser; and that sadly is the reputation of the USA. Vladimir Putin and Xi Jinping must be laughing their heads off.

I wish Biden/Harris a lot of luck. What a dreadful time to be taking over the helm. I suspect times will now be a lot quieter, and far less interesting.