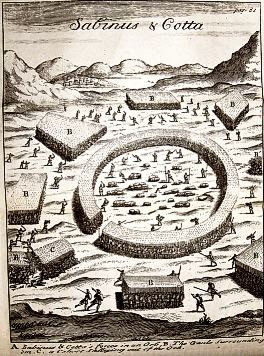 Fellow students of Latin, may remember having to translate the exploits of Cotta.
Personally I never thought to enquire about who this Cotta actually was; all I knew was that he marched around, on Caesar's behest, with several cohorts; out to conquer parts of Gaul.
Yesterday I decided to find-out more. Unfortunately not much is written about him other than in the famous De Bello Gallico where some details are given of his being wounded, losing battles, and eventually his death.
He was obviously a much admired soldier, and Caesar promoted him as joint Senior Officer in his Gallic Army along side his fellow officer Sabinus.
Caesar sent him to 'Gaul' to conquer the area around the German/Belgian borders. He came across fierce fighting, and eventually was defeated inside his own compound (above).
I'm really no better informed about dear Cotta, but at least some of my past 60 years of ignorance has been laid to rest.
The strange thing about learning Latin is that one ends-up being able to say that Cotta is advancing to the north with two cohorts, but one never learns how to ask for a pound of Apples, or even ask the way to the Coliseum.
Posted by Cro Magnon at 04:22