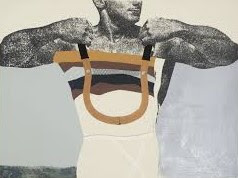 With all next year's post-Brexit nonsense in the air, someone asked me recently if I'd ever regretted moving to France. The answer was obvious; of course not.

It set me thinking. Do I have any regrets at all? I suppose I do have one or two, but they are only regrets 'in passing'.

Firstly I do vaguely regret not having accepted Prof Carel Weight's offer of a place at The Royal College of Art. With the letters ARCA after my name instead of just BA Hons, There is no question that the art world would have taken me more seriously. It was the thought of another two years at college that put me off; and back in central London too. I also had a wife and son to support, and I needed to make money.

Another (half-hearted) regret is that when I sold my original farmhouse here, that I didn't buy another even bigger, older, house, with more land, and more buildings (property was so cheap). I still dream of owning an ancient home, surrounded on all sides by plenty of land; and maybe a lake even. Not only would I have liked the increased privacy, but I would have liked to have established some loosely based agriculture business to pass on to which ever of my children may have been interested.

I suppose I do also regret not tracking-down the little toe-rag who stole my Richard Hamilton 'Adonis in Y Fronts' print (above). I believe it's now worth over £35,000; not a life changing sum, but it still hurts. Had I found him I suppose I might have ended-up at The Old Bailey on a GBH charge; he was an old school friend too!

Otherwise, it's all been plain-sailing.