This (below) is the latest of a series of spam Emails that I've been receiving recently. Of course it was deleted as soon as I'd 'recorded' it.
Of the two I received the day before, one purported to be from The Inland Revenue in the UK saying that I was owed £670, and would I please send them all my banking details so that they could pay me; the other claimed to be from PayPal saying my account had been hacked, and that some toad in Italy was buying expensive T shirts with my dosh; I don't have a PayPal account. These were also deleted pronto.
In the lead-up to Christmas these scammers are coming out of the woodwork by the dozen. BE WARNED, do not open them, they are after your money! 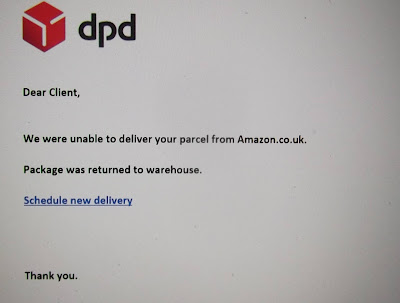 With so many shops now closed, a huge amount of people are buying from Amazon (me included), so I can see the temptation to delve further. Don't.
Posted by Cro Magnon at 15:10