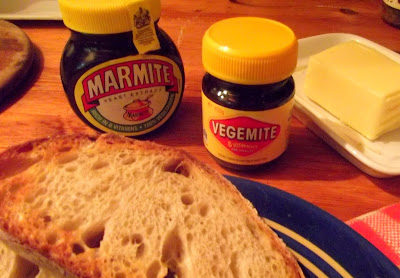 It's a question as old as the hills; Marmite or Vegemite? I have both.

Of course, there is only one answer; it HAS to be Marmite.

Vegemite tastes as if it's been made with burnt dust, mixed with chocolate waste and sump oil. It has an unpleasant texture, and an even more unpleasant dull colour. Its flavour (if indeed that word is even applicable) is akin to 'gastronomic failure'; an experiment that went horribly wrong, and was instantly abandoned; other than as a filler for cracked septic tanks. And as for its 'aroma', it is not dissimilar to something found under shoes.

Marmite on the other hand, is Ambrosia, that infamous food of the Gods. Angels are credited with the original recipe, and Her Majesty herself has given it her seal of approval. It is the food that develops intelligence, strength, and willpower. It has won wars and conquered the world. It was the very foundation of the Empire.

As for its taste, Marmite has been described as 'elixir'. A mythical creation that calls men from the wild to worship at the altar of toast. A breakfast flavour so powerful that fortunes have been made simply on recalling its lingering aroma.

Marmite moments from history: The England team ate marmite before their 1966 World Cup match, making them invincible. Ian Botham famously kept a jar in his pocket, and would dip his finger into the nectar before sending Viv Richards back to the pavilion. Tim Berners-Lee was never without several jars whilst developing his WWW. Cap't Webb rubbed his body with the miracle paste before diving into the channel. Buzz Aldrin took it to the moon. Stanley Matthews used it to replace dubbin on his boots. Etc, etc.

If you still wish to know why Vegemite was banished to the other side of the world, it was because Rolf Harris was reared on it!