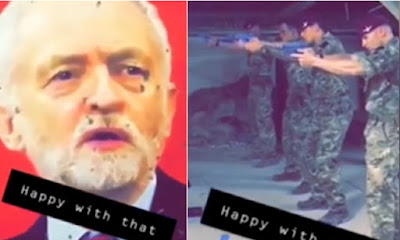 My first thought on seeing the above picture was that those elite-force Paras must be very poor shots.

I know they were only firing wax pellets at the picture of Jezza, but with those rapid-fire pistols one might have thought they'd hit the target more than just occasionally!

Quite a fuss has been made about their choice of target. How dare a member of Her Majesty's armed forces shoot pellets at a Marxist MP. Had they chosen a photo of either May, Mogg, or Boris, those same (ahem) complainants would probably have cheered and raised strings of bunting.

Of course targeting politicians of any political colour is in very poor taste, and is not to be encouraged.

Seeing the above reminded me of Harold Wilson, a distant Socialist Prime Minister. Back in December of 1966, Wilson met the then Rhodesian (Zimbabwean) Prime Minister, Ian Smith, on board the HMS Tiger off Gibraltar. Smith had recently declared UDI after the UK's insistence that white majority rule be scrapped, and Wilson wanted to have words with him.

When the talks were over, Wilson honoured every member of Tiger's crew with a signed photograph of himself.

As Wilson walked down the gangplank to leave ship, he could see beneath him dozens of his signed photos floating on the water. The whole crew had simply tossed them overboard!

No record was made of Wilson's reaction; unlike Corbyn and his target photo.