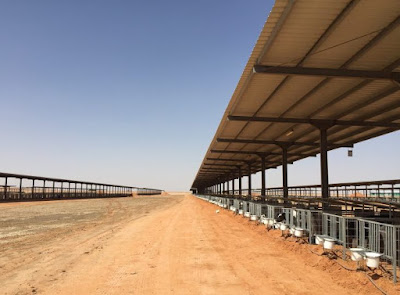 I have just learned that my cousin Robert died 20 years ago. I'd had no idea.

Robert graduated from Agricultural College (Aberystwyth I think), probably back in the late 70's. He had specialised in livestock rearing, rather than arable.

One of his first jobs, in the early 80's was to establish and run a large 'dairy farm' out in Saudi Arabia. The desert 'facility' was all under shady roofing, and was cooled by constantly running fans. All feed and water was brought in from elsewhere.

His job was to get milk production under way, and to train locals to take over at the end of his contract. The staff he was given all dressed in traditional spotless white robes, were lazy, and more than often didn't turn-up for work. He was totally frustrated.

Eventually when he left to return to the UK, with everything running as smoothly as he could manage, he feared that, as no-one was prepared to get their hands dirty, the project would die a natural death. I have no idea what happened.

My cousin must have been about 10 years younger than me. His father was my mother's younger brother. His exploits out in the Middle East made him something of a hero of mine; I admired his tenacious dedication to performing an almost-impossible task.

I may have some of the details (above) slightly wrong, but the scenario is 95% correct.

We lost contact years ago, and I miss knowing that he's no longer there.