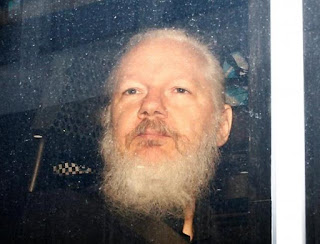 Since running for cover inside the Ecuadorian embassy in London, just monitoring him alone has cost £ Millions. Posting a couple of coppers at the embassy's front door doesn't come cheap. All foreign embassies already have state security, so a couple of extra men in uniform probably did nothing special. I do hope Mr Assange will be made to repay that sum.

It's been a very strange affair; 7 years locked away in a foreign embassy in central London. Enough to send anyone crazy.

We have no idea if he's guilty of the alleged rape and sexual misconduct accusations in Sweden, but we do know he's been responsible for giving air to whistleblowers around the world. Exposing political scandal and shenanigans certainly has its place; rape and groping doesn't.

He's an odd character, and, frankly, the sooner he's shipped off to Sweden or the USA the better. He may have friends in Abbott and Corbyn, but that was to be expected. The majority would like to see him face his charges; otherwise we couldn't give a damn.