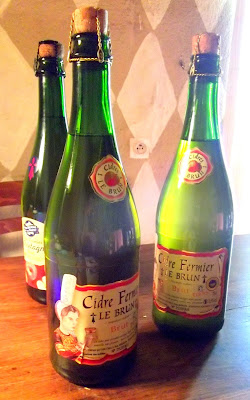 When my son Kimbo was here recently, not only did we crack open a few bottles of Canard Duchene, but also some good ole Breton farm cider.

I really do enjoy drinking quality cold cider. On a Summer's day, there is little more refreshing; other, of course, than my own Elderflower Champagne.

France makes a big thing of it's farm produced Cidre Bouché. It is regarded in a similar way to wine, even though there is no Cidre Grand Cru, Chateau Pomme, or great vintages.

But the French have a right to be proud of their Cider, it's a wonderful drink, not overly alcoholic (5.5%), and follows a tradition that dates back for centuries.

The UK produces FOUR TIMES the amount of Cider than France, but it tends to be sold in big nasty plastic bottles. The main producers make no attempt to market it as a quality drink, and as a result it is held in little regard. I think this is a big mistake.

When we first moved here, local farmers used to pass fresh Cider through their wine vats after the wine had been drawn off. The mixture of the remaining wine, and the Cider, in amongst all the grape detritus made a very acceptable bonus Cider flavoured wine.

I remember, up in Normandy and Brittany, that cider used to be sold in shops without labels. The bottles were corked in the same 'Champagne style' fashion, but the maker wasn't mentioned. I rather liked this, it gave a rusticity that was authentically Breton.

Cider, like Beer, is a quality drink and really should be treated with the respect that it deserves. I love it.