In The Wars Again. 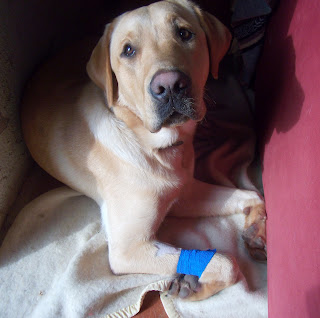 Poor old Monty, he ambles from one disaster to another.
This time we think he must have consumed some poison. One minute he was fine, the next he was lying on the floor shaking and wobbly. We rushed him down to the vet', where they put him on a drip, and kept him under surveillance over night. Lady M was convinced he was going to die.

When we picked him up the following morning he was fine.

The problem with Labradors is that they're never happy unless they have something in their mouths; a stick, a steak, or a canister of arse-nick. They don't differentiate. 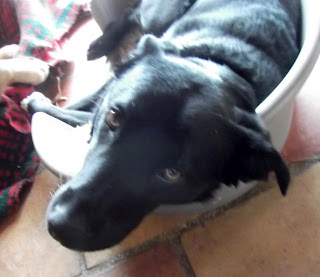 Monty's brother (by adoption) 'Bok', above, goes to the Vet's this morning to have his dangly bits snipped.... Poor old Bok. Why is it that women insist on this? (no answer required, or necessary)

Bok is prone to jumping up on people (I'm trying to stop him). Recently, on a walk, he put his paws up on my chest, and managed to pull my reading glasses off their string; I only discovered they were missing when we arrived home. Yesterday I thought of letting him sniff my current pair to see if he could find the old ones, but whilst rushing about he suddenly stopped to sniff at the ground.... and there they were. Lost then found; all due to Bok.
Posted by Cro Magnon at 07:02