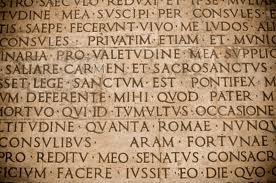 In order to be offered a place at my chosen upper school, the 13 year old, knobbly kneed, short trousered, Cro was obliged to sit, and pass, the dreaded Common Entrance Exam. All the usual subjects were there, as well as ancient Greek, and LATIN.

The Latin teacher at my Sussex Prep' school was excellent; he made the subject both interesting and amusing, and I became rather adept.

Eventually I sat my Common Entrance. The papers were sent off to the school of my choice in Cambridgeshire, and we awaited results. When they came back I was shocked; as was my teacher, my friends, and everyone else South of Watford. I had managed to achieve a pass mark of 90% in my Latin paper; my other papers were not of the same standard, but good enough (thank goodness) to be offered a place at the school of my choice.

On the first day of  Michaelmas term 1960 (the very first day at my new school), I was summoned to the headmaster's study and informed that as my Latin pass mark had been the highest of the 1960 intake, I was to become the year's Classics Scholar, with an annual bursary of 13 guineas. The only stipulation was that the money should be spent on books, and a short account of what and why should be submitted each year.

The headmaster also became my new classics master. He was a pig of a man, and made Latin so dull and tedious that at the end of my first year I took a letter to his study informing him that I no longer wished to continue my studies. He was furious; a Latin Scholar had never been known to do such a thing. My bursary, however, continued for the duration, and I spent the money on Art books..... The school's Art Department, by this time, had become my second home.

My relationship with the headmaster continued to decline, reaching the depths when I happened to mention that I'd met his brother; a rather pleasant rakish bit-part actor (obviously the black sheep). I'd seen him in some small town theatre production, and met him backstage afterwards. He'd described his brother to me as a pompous red-faced buffoon; which was exactly what he was.

My current knowledge of Latin is pretty poor, but I do still keep a large Latin dictionary by my side, as well as a large etymological dictionary.... so somewhere, at the back of my mind, the interest is still alive.