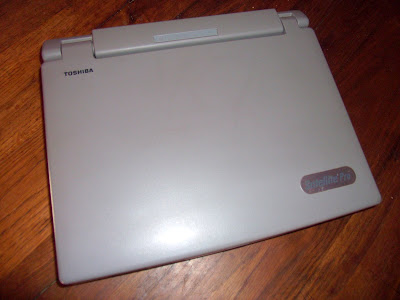 In about 1996, my oldest son, Kimbo, was working in America on Hilton Head Island. He was away for 6 months, as part of his degree course.

One of his ambitions whilst in the US was to buy himself a new computer; such things came much cheaper over there, than back in Blighty. 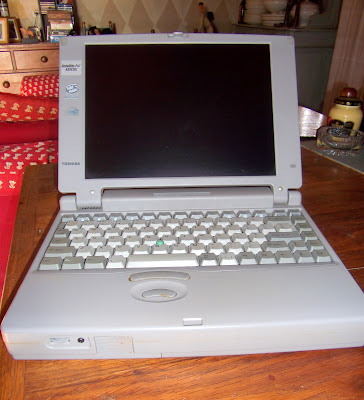 The machine of his dreams was this Toshiba Satellite Pro 435 CDS. It was regarded as State-of the-Art, all singing all dancing, must-have, essential kit for the man about Uni.

He used it for a few years, then just as with his old clothes, shoes, and music tapes, he passed it on to his belovéd Papa.

I continued to use it for several years until its slowness really began to annoy me, and I reluctantly upgraded to an IBM ThinkPad.

It's difficult to imagine now (just 16 years later) how cumbersome these machines were. It weighs about 2 kilos, and is about 3 inches thick. Booting-up in the morning (with dial-up) took as long as it took me to shower, eat breakfast, and take a long walk. But as my son assured me at the time, it was definitely Sate-of-the-Art, so I was happy.

It now sits in a box with several other relics; yesterday was the first time I'd seen it in years.