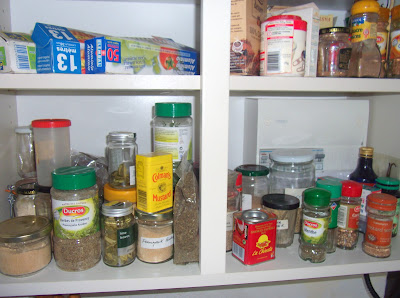 It's often said that Mr Colman made his money from the mustard that was left on the side of the plate. Of course he actually made his money simply by selling mustard powder, regardless of whether it was eaten or not.
I was just going through my dried herbs and spices cupboard (everyone has one similar to the above), and I found a jar of juniper berries that I took great pains to pick (literally) some 10-15 years ago. I haven't used a single one. It went to the dustbin.

So, I got to wondering how many £ millions, if not £ billions worth of never-to-be-used expensive spices are holed-up in the back of cupboards throughout the world. Also, the amount of fresh herbs that are grown in ostentatious herb-gardens and never come close to a kitchen; it must be enormous.

Other than Salt and Pepper, I mostly use Curry powder, Raz el Hanout, smoked Paprika, Cumin (ground and seed), 5 Spice Powder, Garam Masala, Cinnamon, and one or two others. I also use dried Herbes de Provence, dried Parsley, Lime Leaves, Mint, and Oregano. All other herbs come fresh from the garden; as do some of those that I also use dried.

I could quite probably chuck out a load more jars from the cupboard; but (as they say), you just never know when something might be needed!

Remember those 1960's spice racks? They're still screwed to walls in kitchens all over the place, and the jars remain untouched; after 50 years you can imagine what treasures lie within. Have you noticed that they always turn up at car boot sales. YUK!