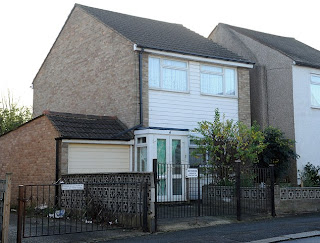 This unassuming small house in Walthamstow, East London, belongs to a Mrs Janice Mason. She'd been left the house by her late parents and had decided to sell.

She found a buyer (for £248.500), but just before signing deed papers, a bunch of 8 Moldavian squatters broke down the back door, and took up residence.

Mrs Mason did the right thing and called the police, only to be told that it was a 'civil matter', and they could do nothing. So, I have a couple of questions.

If these same Moldavians (or anyone else) were to break into either Buckingham Palace, an MP's house, or 10 Downing Street, would the police still do nothing?

If I was a burglar and was caught red-handed, having broken into someone's house, and I said I was simply a squatter, would the police tug at their forelocks and apologise for having disturbed me?

I really have nothing against certain people squatting in abandoned houses, as long as they do no damage and quit when asked, but this crazy lawless phenomenon of turning-up in the UK, breaking into someone's house, then claiming huge amounts of benefit money (there were 8 of them, and one heavily pregnant), has to stop.

The government promised action to make this illegal; but why are they still hanging about and doing nothing?

May I suggest that Mrs Mason smashes all her windows, has all her services cut off, and maybe sends in a few extra Hells Angel squatters to join the Moldavians. That should sort out the problem, even if the cops won't! (If she does things according to UK law, it will cost her a fortune in lawyer's fees etc)

p.s. The above info came from an on-line British newspaper, that accepts 'comments' below each article. I don't think I've ever seen such huge amounts of vitriolic condemnation on any other subject. It really is time that the UK stops being seen as an easy touch, and puts her foot down in no uncertain terms.
Posted by Cro Magnon at 05:48