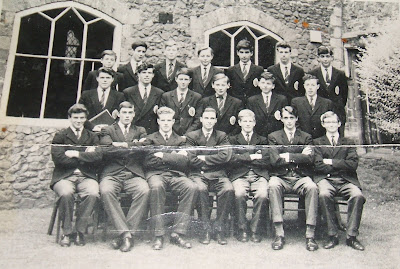 I can't remember what this photo commemorates, I expect it was sport related; probably cricket (someone in the middle row is holding a 'score book'). For some reason I failed to write anything on the back.

One always loses contact with old school friends; they tend to live in distant lands. But I do know a little about what happened to some of those above.

One became a trans-atlantic airline pilot, one is the manufacturer of a well known brand of exclusive leather gloves, one is a big-wig at the BBC and presents arts-related programmes on BBC1 and BBC2 (some of you may recognise him!), one designed famous record covers for Pink Floyd-Led Zeppelin-Wings-and others, one organised private 'safari-style' tours to difficult untrodden locations; and (shame be upon him) one became a painter.

And now for the story: About 30 years ago I had visited a friend who lived a couple of Kms from us, and just before taking my leave he asked if I would help him move a big lumpy piece of furniture for one of his neighbours; a fellow Englishman.

The Englishman had just added a spectacular conservatory extension to his sitting room, and as a result, a beautiful, but very heavy, antique 'armoire' needed to be shifted a few metres.

When the job was done we accepted the traditional offer of a glass of rough red and half a dozen stale crisps, and we chatted about nothing in particular. It was only then that I noticed one of those typical long school photos hanging on his wall. It featured a very familiar looking classic medieval crest, illustrating King Edward the Confessor. I looked more closely at the photo and asked my host why it was there. He screwed up his eyes, then pointed to a small figure amongst the crowd of anonymous schoolboys and said 'that's my son'. I then pointed to another small figure and said 'and that's me'.

I knew his son quite well; I think we'd played in the same school Rugby team, and had later both worked on the London Stock Exchange (he stayed; I didn't). He had been regularly visiting his father in France (at least three times a year), and although I lived just down the road, our paths had somehow never crossed.

Over the last two 'Sunday Stories' I've talked about another ex-school-friend, who, I'm pleased to say, does NOT feature in the above photo (un-fit, lazy, and inept). Although I would quite liked to have added..... 'one became a swindling, cheating, bastard'.

I should perhaps explain that King Edward the Confessor was a fellow old-boy of my school. That might give you some idea of its age, and therefore the age of its wonderful buildings.