The Sunday Story: 'My Ophelia'. 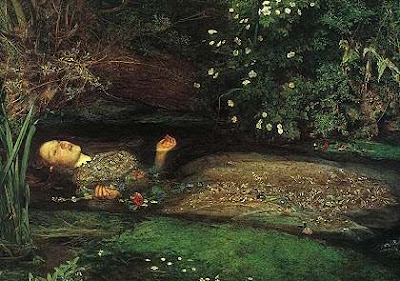 Back in about 1967, an ex-school-friend of mine (I shall mention him again next Sunday) took over the rental of a fabulous London 'Mansion Flat', overlooking Regent's Park; its occupant was moving abroad.

The previous tenant (a well known British sculptor) was off on a five year 'teaching fellowship' to California, and there were certain things he simply couldn't take with him. One was a huge, 6 inch deep, hand-cast, glass 'coffee table', which probably weighed as much as a double-decker bus; another was a beautifully executed, full size, copy of 'Ophelia' by Sir John Everett Millais (above). My friend negotiated very advantageous prices for these two items (plus a few other bits and pieces), and bought them. I was unbelievably jealous about the painting; and still am to this day! It was as if he owned the original.

I've always had a liking for the story of Ophelia, as, like most school-boys, I was obliged to study Shakespeare's Hamlet as part of my English exam course. During one particular English lesson we were all invited to write a poem to the memory of Ophelia; below is my boyhood offering, which I entitled 'My Ophelia'.

Why, you might ask, have I kept such an insignificant little 16 word poem for all these years? Well, my English teacher at the time, an unpleasant and overbearing man not known for compliments, actually told me he rather liked it. That was enough for the young Cro, and I tucked it, in the appropriate spot, between the pages of my own copy of Hamlet. Compliments in my life have been in very short supply; very British!


When you were drowned,