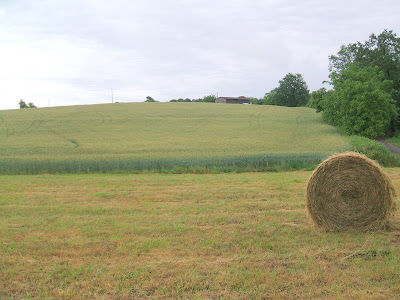 It'd be almost impossible NOT to learn something new each day. If, however, one managed the impossible, I would consider that day wasted.

Yesterday afternoon, for example, my friend Laurence popped in to see us unexpectedly, and I quizzed her about her field, above, of (what I now know to be) Triticale.

We've all heard of Wheat, Barley, Oats, and Rye; but TRITICALE?

Developed in the late 19th Century by Scottish/Swedish researchers (hence the peculiar name), it's an ingenious cross between Wheat and Rye. Wheat playing the female role, and Rye the male (i.e. Rye provides the pollen).

It's only recently been perfected as a viable crop, and is already being grown extensively across Europe, China, and elsewhere. So, have you eaten it? Quite possibly, as it turns up in breakfast cereals, pasta, health-foods, and some breads.

Laurence said her own crop would probably be sold as cattle feed, but research is also under way to use it to produce bioethanol. I also understand that it contains much higher protein than Wheat. The plants themselves are very sturdy, so little chance of it being knocked down by wind, as one sees so often in ordinary Wheat fields.

So the next time you see a nice solid looking field of Wheat, it could in fact be TRITICALE. Pub-quizzers take note!.... (couldn't they have called it Reat?)