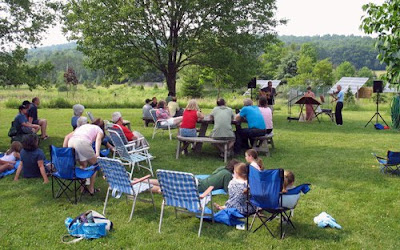 Almost summer; and everyone decided to get together for a huge family picnic in the grounds of Willow Manor. Blankets were spread on the ground for the children, rickety camping chairs opened up for the adults, and baskets of assorted home-grown fare taken from the boots of cars.

Tom knew people in the music business, and had organised a band for the day. 'Amy and the Soul Seekers' (from Kansas) would sing two spots; a few 60's and 70's classics (Lennon, McCartney, etc) through lunchtime, then a selection of numbers by America, Fleetwood Mac, Bread, and the Ting Tings in the evening.
At mid-day Linda and ElizabethM joined forces to make sandwiches, wash salads, and peel a mountain of hard-boiled eggs (courtesy of ElizabethM's hens).
The children all got together to play games. Potty had been put in charge of kids entertainment, and all of Linda's grandchildren joined up with Sue's Charlie (and Potty's own children) to play 'Pin the tail on Tom', and 'Musical Chippendale Chairs' (kindly supplied by Willow).
Everyone had been allotted a task for the day. Maiden picked armfuls of sweet scented roses for the long white-draped tressle tables, Simone suspended romantic swathes of Indian silks from the flowering Magnolia trees, and Molly acted as official photographer, promising to post her results on the net the following day.
The day flew by as clouded skies gave way to the warm star-studded black of night. The men-folk sat around the improvised stage, drinking beer and listening to Amy's singing as they awaited instructions. Cro and Julie did drawings with those children who thought they were too grown-up for party games, and encouraged them to illustrate some of Willow's specially composed picnic poems.
When all was nearly over, the paraphernalia of the day was packed away. And as they were all saying their goodbyes, and promising to return the following year, Premium T, and her friend Melissa, circulated with huge wicker baskets, handing out mementos of neatly packaged bags of sweets to all the smaller children.
Then, as if the day had been no more than a page from a romantic novel, Simone mounted her gleaming white steed, and in a haze of flowing white ruffled silk disappeared, side-saddle, into the misty night. Tom and Her Indoors loaded up their trusty Volvo with the borrowed sound system, and took off with Amy and the two band members. Cro and Lady M retired to their compact Royce where they sat a while watching shooting stars. And the many families with children, who had come in such numbers, patiently awaited their voluminous chauffeur-driven cars and coaches.
'Next year'. Said Amy, as she mused over the evening. 'Not only would I love to come back again to perform, but I shall also offer every family a signed copy of my latest book'.
Posted by Cro Magnon at 05:02