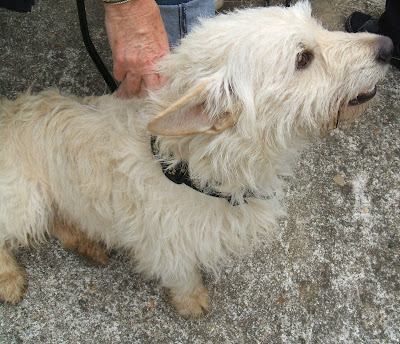 Regular readers might also remember that my friend Terry's dog, Molly, died back in April.

Anyway, Oscar's owners wanted rid of him, so guess who said she'd give him a new home; yes of course, it was my old friend Terry.

Oscar's one of those dogs that you just know will become a really good family pet (given the right owner!). Sadly, he's been previously owned by the WRONG people. He's been slightly mistreated, locked up in a garage, and when he became surplus to requirements, just cast aside. I imagine he was a Christmas present for the previous owner's two small girls, who've probably now discovered the delights of inanimate dolls instead!

He's about 3 years old, begs attention and affection, and just loves having fun. On the same principal as Molly having been my niece (and I her uncle), I'm now hoping that when Terry goes away, she'll leave the lovely Oscar with me, and I shall return to playing Uncle Cro. I can't wait.

The only sad thing is, that the poor dog looks so pleased to be rid of his previous owners who live just 100 metres away.