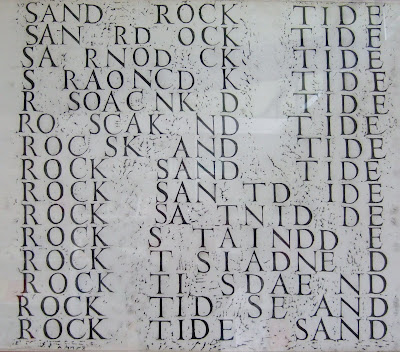 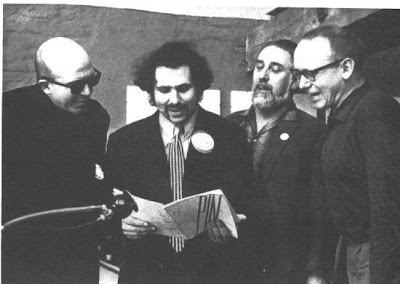 I have so many artistic heros, that I hardly know where to start.

The picture above shows some of the UK's most influential 'concrete poets' of the 1960's. They are (from the left) Dom Silvester Houédard, Pete Brown, Bob Cobbing, and Ernst Jandl. They are seen here (in '66) performing a Kurt Schwitters 'sound poem' entitled 'Fury of Sneezing'. Just in case anyone is unaware, the word 'Dom' is short for 'Dominican Monk'.

Of the four, Houédard was unquestionably the most inventive. From the confines of his 'monastic cell' he experimented with typeface (see top picture), creating some of the most iconic works and installations of that exciting 60's barrier-demolishing period.

I only met him once. We were both members of the old ICA (Institute of Contemporary Arts), when it was still a small and reasonably exclusive artists club, based in London's Dover Street . I was exhibiting a long suspended tubular poem (very much influenced by Houédard; maybe too much so), alongside several of his, and other members, works (including Ian Hamilton Finlay). He said one or two kind words to me; probably trying to avoid using the word 'plagiarism'. I, of course, was just amazed that he spoke to me at all!

In those heady days the most important thing was inventiveness. Quality was briefly abandoned; it was the age of 'The New' and 'The Different'.

Ian Hamilton Finlay, the Scottish poet/ sculptor/ artist, was at that time producing his carved stone outdoor poems for his 'Little Sparta' garden near Edinburgh; no doubt partly influenced by Houédard. Finlay later went on, in his turn, to influence the works of Richard Long, and therefore Andrew Goldsworthy, et al. This is how it happens.

Houédard is a man of the past; his name now hardly ever mentioned. But he was a giant, and giants don't often walk this way.