There's a lot to be said for the cosiness of a log fire (below, being enjoyed by Monty and Bok). 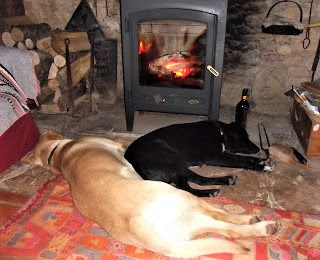 Monty and Bok not only adored sleeping in front of the fire, but they also adored each other. Bok (the black one) was given to us by a neighbour because he spent all his time with Monty; she thought it was better to let them live together. 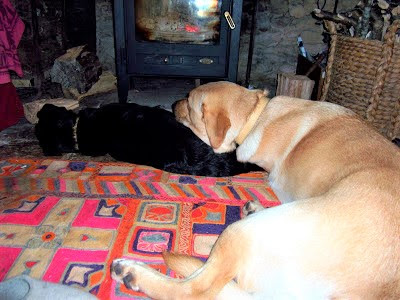 This was a typical stance, with Monty using Bok as a pillow. They would often also share a bed rather than use their own.
Both are now gone and we miss them. With a good fire in the Wood-burner, and the boys snuggling-up together, it made Winter evenings into a real pleasure. Billy has now taken their places in front of the fire, but here in Brighton we have no fire for him to enjoy.
I don't know if Dogs prefer to sleep in front of a fire, or beside a radiator, but I know which I prefer. Billy's bed is beside a radiator, but he sleeps on Lady M's sofa.
Posted by Cro Magnon at 04:37