Eradicating our (embarrassingly) Glorious Past!

I know I'm known to moan occasionally, but there does seem to be a lot to moan about at the moment!
I suppose really it's 'Frustration' rather than a moan, but I know I'm not alone in feeling the way I do. 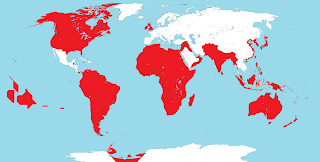 Time was, when The Empire looked like this (in red above). Now the UK is fast becoming no more than a damp bloody squib; and getting ever damper by the day; helped by a bunch of 'woke' radicals who seem to hate the 'Great' in Britain, and have no clue about what they will be losing in the process.

Republicans are continuously trashing the monarchy, and are pushing for some Anarchist/Marxist/Leninist style state. It's happening in the press, on TV, in our universities, and even in our cinemas.

There is a feeling afoot that the tiny UK has had its moment of glory, and it's now time for others to have theirs. It's time to apologise for our past success, and we are made to feel that we must ask for forgiveness; what for is still not sure. Meanwhile The East is in the fast lane, and rubbing their hands with glee!
Britain is currently trying to punish itself for the 'mistakes' of our Imperial past. Countries that were once loyal to H M The Queen are now worshipping at the altar of China. China is slowly but surely colonising The Commonwealth. Many will have seen that Barbados is the latest willing victim; the Chinese have already moved in.

There is a sense of self-destruction about; shooting ourselves in the foot. People now hardly dare mention Britain's glorious past, and many wish to eradicate all evidence of it completely.

The UK's greatest leaders, inventors, and adventurers, are admired the world over, but are derided at home. New villains are being 'outed' almost daily. Just recently Gladstone Rd, in Sheffield, came under a woke attack. Named after Prime Minister William Gladstone, who was thoroughly anti-slavery, it was demanded that the name be changed because his father, Sir John, was involved in the slave trade; nothing at all to do with William, who described slavery as "the foulest crime in UK history". Surely, someone to be proud of, even by the woke brigade!

I do wish they would just get over it; and concentrate on the problems of TODAY. The country is going through a period of great difficulties, whilst a bunch of unimportant junior snowflakes fuss about things over which we have absolutely no control; and is of no importance other than to a few trouble makers.

Great Britain was built on the back of swashbuckling, industry, and foreign trade. It's what all countries strived for at the time, and it just happened that Britain was better at it than most. I don't really consider that anything to be ashamed of.