Happy, then not Happy.

I was quite shocked to see these Daffs sprouting in the churchyard, as I was walking with Billy just now. 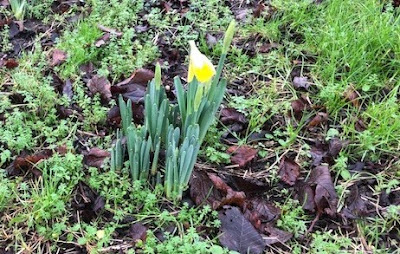 But not nearly as shocked as I was to find two female (I think) 'Goths' (complete with black lipstick, bones through their noses, and all the usual other junior accoutrements, writing on gravestones.
I approached them to ask what they thought they were doing. My question seemed to fall on deaf ears, until a rather saucy string of expletives came my way. I didn't have my phone with me, so I asked a fellow dog walker (Caspar's Mum) if I could borrow hers to take some photos. I followed them to where they were then writing, and took some good full-frontal portraits of them. 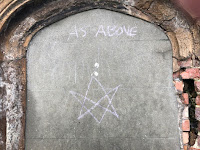 This (above) is just one example of their handiwork; there was a lot more, all over most of the ancient graves.
The uglier one of the two then informed me that I didn't have her permission to take her photo; I replied that I hadn't asked! I also told her that I was photographing the graffitied gravestones, and that she'd simply been in the way. I was half hoping that she would have taken a swing at me (I'm still capable of a good strong punch) but they sloped off into town.
I did ask Caspar's Mum to send the photo to the police, or someone in charge of the parks, but I haven't seen her since.
I'm writing this because I was furious at seeing two such childish idiots defacing a graveyard with no shame whatsoever. I hope their photos do reach the police and that some action is taken. Their faces must be known!
Posted by Cro Magnon at 14:44